The Cambridge History of Australian Literature (2009), by Peter Pierce, calls Antipodes “the most significant overseas journal of Australian literature.”

Antipodes, the official journal of the American Association of Australasian Literary Studies (AAALS), has its own website. The journal is published in June and December of each year. It welcomes critical essays on any aspect of Australian and New Zealand literature and culture, and comparative studies are especially encouraged. Antipodes also furnishes readers with an annual bibliography of Australasian literature and criticism published in North America.

Antipodes is a peer-reviewed journal indexed in both the MLA International Bibliography and AustLit. It is published by Wayne State University Press with support from Vassar College.

Antipodes accepts submissions in the following genres: critical essays, interviews, fiction, drama, poetry, creative nonfiction, and book reviews. All critical essays submitted to the journal will be subject to peer review, while submissions in other genres will be assessed by the relevant section editor.

For the journal’s most up-to-date submission guidelines, please visit the website of our publisher, Wayne State University Press. 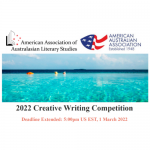 Antipodes also accepts submissions for its annual Creative Writing Competition. In 2022, the American Association of Australasian Literary Studies (AAALS), together with the American Australian Association, welcomed submissions to the second annual Creative Writing Competition, which included the following two prizes: AAALS Fiction and Nonfiction Prize, and AAALS Poetry Prize. The winners were awarded US$500 cash prizes and publication in Antipodes.

Winner of the 2022 AAALS Fiction and Nonfiction Prize:
“Siren” by Catherine Padmore

Short List Finalists for the 2022 AAALS Fiction and Nonfiction Prize:
“Flight” by Shady E. Cosgrove
“Beyond the Marram Grass” by Georgia Rose Phillips

Individuals and institutions wishing to subscribe to Antipodes (or to purchase a single copy) should visit the website of our publisher, Wayne State University Press.

Current and Back issues

Details of the most recent issue of Antipodes, as well as issues dating back to 1995, can be found on the website of our publisher, Wayne State University Press.